The Life of Saint Barbara the Great Martyr 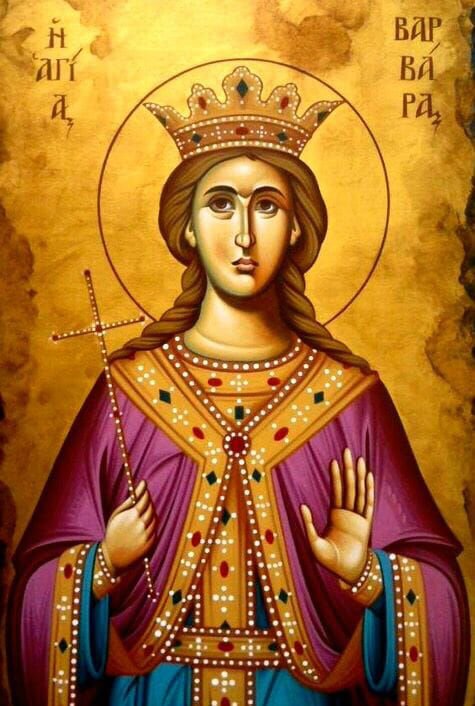 The History of our Church offers many examples of individuals who dedicated their lives to God.  Their stories are different and vary greatly, yet one thread that links them all is their love for God.  They endured whipping, stoning and other forms of torture because of their beliefs. Some were fed to lions while others were beheaded.  Yet even when faced with enormous pressure to deny Christ they stood firm and fearless even unto death.

One such individual named Barbara lived in the city of Heliopolis at the beginning of the third century.  She was a lovely and delightful girl; the daughter of Dioscorus, a wealthy nobleman and pagan.  Barbara was exceedingly beautiful and her father always kept a close watch over her.  In his zeal to protect his young daughter, Dioscorus built a magnificent tower for her to live in to keep her safe.  He spared no expense providing her with every material luxury - the best food; clothing; servants; and teachers.  But he forbade her to have friends or to even speak to anyone without his permission.

Dioscorus’ intentions were simple - he wanted to surround his daughter with the greatest comforts and attendants focused on teaching her how to worship the pagan gods.  He felt that by keeping her secluded from the world she would be sure to remain a pagan worshipper.  Barbara was a bright and intelligent girl who was obedient to her father’s wishes and remained in the tower, without complaint, even during his frequent business trips.

One day before leaving on one of his many business trips, Dioscorus decided to build a bathhouse for Barbara next to her tower.  He drew up plans and left strict instructions for the builders to follow.  Dioscorus’ business however kept him away for so long that the workers were more than half finished with the bathhouse and still there was no word of his return.

While Dioscorus was able to control her environment he was unable to prevent Barbara from exercising her acute intelligence.  Through contemplating the reflection of God in nature, Barbara had come to the knowledge of the One God in Trinity and turning aside from vanities, she felt in her heart a longing for Christ.

It was around this time that Barbara came down from her tower to inspect the new structure.  She noticed that it only had two windows and she instructed the builders to insert a third window so that the room would be lit by a triple light which would symbolize the threefold light of the Father, Son and Holy Spirit that enlightens everyone who comes into the world.

Remembering Dioscorus’ stern instructions the workers were afraid to deviate from the plans.  But Barbara assured them that she would assume full responsibility for the change in plans.  The workers, aware of the love that Dioscorus had for his only daughter, agreed and placed a third window in the bathhouse.  One day as Barbara stood by the pool facing the East she said, “In the name of the Father, the Son and the Holy Spirit” and miraculously drew the sign of the cross in the hardened marble wall of the bathhouse with only the use of her finger making the holy impression.  She then returned to her tower and spent her days praying and fasting.

When Dioscorus finally arrived home he immediately noticed the third window in the bathhouse and he became very angry.  He entered the bathhouse to inspect it further and noticed the large cross carved in the marble wall.  He became furious.  He immediately went to the workers and demanded to know who gave them permission to make these changes to the bathhouse.  The workers, cowering in the face of such anger, replied that Barbara instructed them to add the third window and then drew the cross herself on the marble wall with her finger.

Dioscorus immediately sought out his daughter and demanded to know why she had deviated from his strict instructions and if the inclusion of this third window had an additional meaning.  Barbara responded in a very loving way to her father, stating that indeed the three windows represented the three Lights or the Holy Trinity, which guide everyone who comes into the world.  Barbara then proceeded to confess her faith in the Holy Trinity.

Upon hearing Barbara’s confession of faith Dioscorus became furious!  His plan of keeping his daughter in darkness had failed.  Barbara was brought to the knowledge of God’s existence through the opening of her mind, heart and soul by the grace of God, to feel His presence.  Secretly she was able to meet with some Christians who told her about Christ and His teachings.  Convinced of the Truth concerning Jesus she became a Christian whose love for God inspired all who heard her story.

Blinded by his fury, Dioscorus delivered Barbara to Marcian, the Roman prefect, to torture her until she denied Christ.  Young Barbara was stripped and struck with whips and clubs until she stood in a pool of her own blood.  To make her pain and suffering even more intense the soldiers rubbed vinegar into her wounds.  Through all this however, Barbara stood firm in her faith and refused to deny Christ.

She was then thrown into a dark dungeon and ordered to return the following day.  While in her cell Barbara knelt in prayer to ask God to continue to grant her the strength that she needed to remain faithful.  And as she prayed her heart was filled with heavenly joy and her wounds were completely and miraculously healed.

In a nearby cell another pious young lady named Juliana, was imprisoned because of her belief in Christ.  Upon witnessing the miraculous healing of Barbara Juliana praised God and promised to endure whatever terrible tortures she would face because of her faith.

The next day Barbara was brought in front of Marcian.  He was amazed to see that her wounds had healed and demanded that she deny her faith in Christ.  Her refusal angered the prefect who ordered her body to be hung on a stake and ripped with iron claws.  The soldiers then burned her wounds with hot irons and beat her head with spiked clubs.  Yet through it all Barbara found consolation in prayer.

Juliana witnessed Barbara’s tortures and wept bitterly over her inability to assist her.  When Marcian saw this he ordered that Juliana be brought forward and tortured in an effort to have her renounce her faith in Christ.  The horrible beatings resumed and continued for several hours while the young ladies stood praying and chanting hymns.  Their refusal to renounce their faith only further frustrated Marcian and he ordered that the two girls be taken out of the city and killed.

When Dioscorus, who was watching his daughter’s torture, heard Marcian pronounce the sentence he offered to execute Barbara himself with his own sword.  Barbara and Juliana were then led out of the city to a mountainside and were beheaded - Barbara by her father, and Juliana by an executioner.

As the two men hurried down the mountainside a great bolt of lightning came from heaven and struck Dioscorus killing him.  Another bolt of lightning killed Juliana’s executioner.  When the cowardly Marcian heard of these events he became so paralyzed by fear that he died of fright.

Saint Barbara gained her crown of martyrdom on December 4, 306 and joined her true Father in Heaven.  Through her intercessions, O Lord, Have Mercy on Us.

Apolytikion in the Fourth Tone
Let us praise the most honorable Barbara. She thwarted the enemy's power, and through the might and strength of the Cross, she was made free in her flight to God.

Hymns from The Paraklesis Service of Saint Barbara

You are the Savior’s famous prize winning Martyr and our helper in adverse circumstances, an ever-flowing fount of holy miracles.  With undoubting faith and love we entreat you, O Barbara.  Be there when we need you most, and protect us from danger, and keep us safe from ill-ness and disease, from every hazard, disaster and dire straits.

You received the divine grace of cures and healings from Christ.  Therefore I entreat you, O Martyr, to treat my brokenness and my incessant pain.  And change my soul’s grief and sorrow into joy and happiness, glorious Barbara.

Saint of God, intercede for us.  Uou, O Martyr St. Barbara, famously finished the race on the track of martyrdom.  Therefore direct us on the straight and narrow path of God’s divine commandments, away from shortcuts to perdition, by your providential grace.