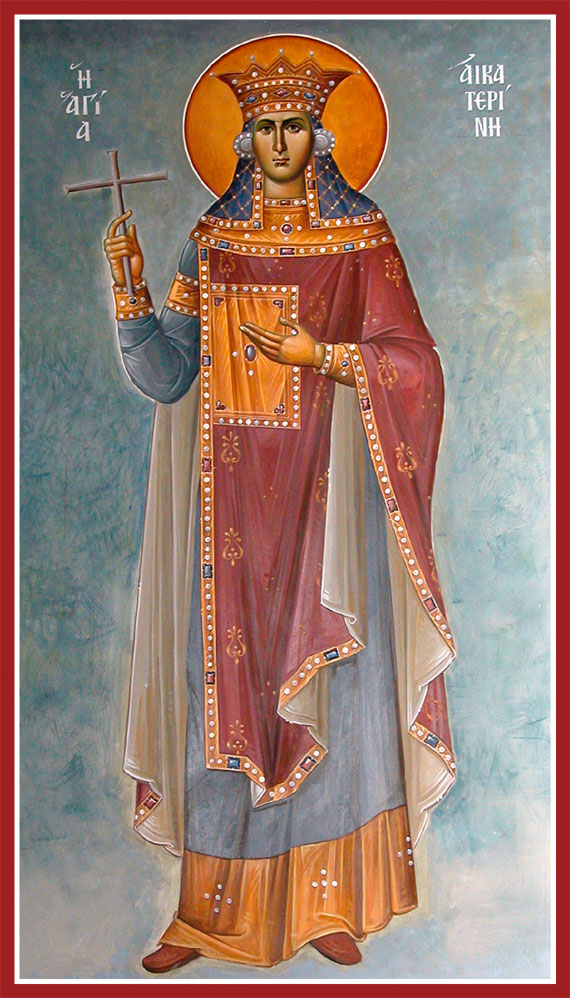 Catherine was the daughter of Cestus, a wealthy patrician of Alexandria, the capital of Egypt and metropolis of the arts and sciences. She was widely admired not only for her noble birth but also for the exceeding beauty and intelligence that God had given her. Taught by the best masters and most illustrious philosophers, she learned while still a girl to follow complex lines of argument and obtained a perfect understanding of the philosophical systems of Plato, Aristotle and their followers. She also excelled in the literary sphere, was familiar with the works of all the great poets from Homer to Virgil and was capable of discussing every subject, in a variety of languages learned from scholars and foreign visitors to the great city.

In her quest for knowledge, she had made herself acquainted with all the physical sciences, especially medicine, and there was no area of human wisdom beyond the range of her penetrating intellect. By the time she was eighteen, even the most learned scholars were in awe of her intellectual accomplishments. All this, combined with noble birth, beauty and wealth, made her an enviable match and there were suitors in plenty for her hand. But having a presentiment of the excellence of virginity, Catherine refused them all and made it a condition with her parents that she would accept none but a youth who equaled her in nobility, riches, beauty and wisdom.

Her mother, in despair of finding such a one, sent her to seek the advice of a holy Christian ascetic who lived not far from the city. He told Catherine that he did indeed know a man such as she was looking for, and possessed of that surpassing wisdom which is the very source and spring of all things visible and invisible – wisdom neither gained nor appropriated, but his eternal possession. He is noble also above all that we can think of, for He has authority over the whole universe and has made the world by his own power. Master of the worlds, principle of all wisdom and of all knowledge, He is also, the Elder told her, the most beautiful of the children of men (Ps. 44:3), for He is God incarnate: Son and eternal Word of the Father, who became man for our salvation and who desires to espouse every virginal soul. As he said goodbye, the ascetic gave her an icon of the Mother of God carrying the divine Child in her arms.

That night the Mother of God appeared to Catherine, but Christ turned away and would not look at her, saying that she was ugly and unclean because still subject to sin and death. Grief-stricken, she went back to the ascetic who instructed her in the mysteries of the faith and gave her new birth unto eternal life in the waters of Baptism. Then the Holy Virgin appeared to Catherine again with Christ in her arms, who said to His Mother with joy, ‘Now I will accept her as my most pure bride for she has become radiant and fair, rich and truly wise!’ In token and pledge of this heavenly betrothal, the Mother of God put a ring upon the finger of the maiden and caused her to promise to take no other spouse upon earth.

Now in those days the Emperor Maximin (305-11), like Diocletian before him, tried to make all his subjects show their submission to his power by offering idolatrous sacrifices under pain of torture and death. When these impious rites were taking place in Alexandria, Catherine appeared before him in the temple and declared her allegiance, but severely reproved the idolatrous ceremonies. Struck by her beauty as much as by her boldness, the Emperor listened as she developed her argument and he was overcome by her wisdom. Accepting her offer to engage the foremost scholars and orators of the Empire in public disputation, Maximin sent heralds all over the Roman world to bring together scholars, philosophers, orators and logicians. There arrived at Alexandria fifty in all, (although some accounts give the number of orators at 150) who presented themselves before the Emperor and the crowd that gathered in the amphitheatre, to confront the slender young girl. Alone, but radiant with the grace of the Holy Spirit, she was in no fear of them, having been assured by the Archangel Michael in a vision that the Lord would speak through her mouth, and cause her to overcome the wisdom of the world by the Wisdom that comes from on high.

In that strength, Catherine showed up the errors and contradictions of oracles, poets and philosophers. She showed how they have recognized for themselves that the so-called gods of the pagans are demons and the expression of human passions. She even referred in support of her arguments to certain oracles of the Sibyl and of Apollo, which dimly tell of the divine Incarnation and life-giving Passion of the Son of God. Overthrowing their myths and fables, she proclaimed the creation of the world out of nothing by the one only, true, eternal God, and the deliverance of man from death by the Incarnation of the only Son of the Father. Having run out of arguments, the fifty orators were reduced to silence. Recognizing their error, they asked the Saint for Baptism, to the fury of the Emperor, who condemned them to be burnt alive on November 17.

Finding Catherine immune to flattery, Maximin had her tortured and thrown into prison, while a dreadful instrument of torture was constructed of four spiked wheels connected by an axle. Catherine was attached to this machine as soon as it was ready, but an Angel came to free her and the death-dealing chariot hurtled down the slope. Seeing the feats of the holy Martyr, Maximin’s own wife was converted and visited Catherine in prison, escorted by the commander Porphyrius, a close friend of the Emperor, and by 200 soldiers, all of whom became disciples of Christ. Catherine received them with joy and foretold that they would soon bear away the crown of valiant athletes of the faith. The Emperor was enraged at such defiance within his household. Forgetful of human feeling, he had his wife cruelly tortured and beheaded on November 23. On the following day Porphyrius and his company were put to death.

On November 25, Catherine was brought forth from her dungeon to appear at the tribunal, fairer and more radiant with heavenly joy than when she had entered it, for she saw that the day of her union with Christ had come at last. She was taken outside the city and, after a last prayer of thanksgiving to the Lord who had revealed to her the inexhaustible treasures of true wisdom, she was beheaded. Her body was then conveyed by two Angels from Alexandria to Mount Sinai. There it was discovered in the eighth century by an ascetic who lived in the vicinity. The precious relic was later translated to the Monastery that the Emperor Justinian had founded in the sixth century. It is there to this day, giving forth a heavenly scent and working countless miracles.