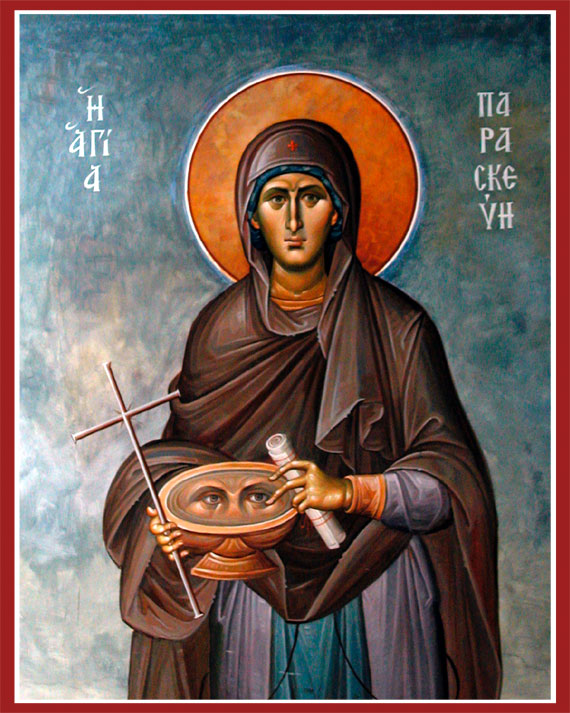 Saint Paraskevi was born in Rome (circa 130 A.D.) during the reign of the pagan Emperor Adrian. Her parents, Agathon and Politia, were devout Christians even though at the time, belief in Christ was a crime against the state punishable by death. Agathon and Politia, who were of nobility, likewise ignored the disdain of their peers by championing the cause of the down trodden. They were fervent Christians who prayed earnestly for a child, promising to God that they would raise the child in a God fearing manner.  They were blessed late in life with a daughter, they named Paraskevi, because she was born on a Friday (Paraskevi in Greek).

Keeping their promise to God, Agathon and Politia were vigilant in exposing Paraskevi to the fullness of Christianity. The task was made considerably easier because the young girl had a natural penchant for learning. With the help of private tutors, Paraskevi became an ardent student of both Holy Scriptures and secular learning. However, the greatest influence in her life, according to her own testimony, was the Christ-like example of her parents.

Young Paraskevi developed into a cultured, sensitive and beautiful woman. It wasn’t long before some of the noblemen began to take notice of her, and to seek her hand in marriage. Paraskevi always managed, however, to find some excuse to politely refuse. Because inwardly she was convinced that she was destined for a more sublime mission in life.

Paraskevi was orphaned of both parents when she was twenty years old. At this point in her life, that inner feeling, that she was destined for a higher calling, had crystallized into love and zeal for Christ. Her greatest desire was to become an apostle for Christ. To achieve her goal, Paraskevi distributed all her inheritance among the poor of Rome; entered a convent and was tonsured a nun. At the convent, Paraskevi distinguished herself in humility, love and spiritual fortitude.

When she finally became proficient in prayer and sacrifice, the Abbess granted her leave so that she could fulfill her life’s ambition; to preach the love of God to all men. This was truly a precarious mission, because the pagan Roman Empire was extremely hostile toward Christianity. Even the most courageous of Christians were reluctant to openly admit that they were followers of Christ. Nevertheless, this did not daunt Paraskevi, nor did it dampen her zeal. As a matter of fact, she began her preaching mission right in Rome! The fervor of her kerygma, and the example of her commitment were such an inspiration, that great multitudes were converted on their very first encounter with the Saint. In spite of her great fame and legacy, Paraskevi managed to elude the authorities. Heartened by this, she decided to extend her ministry to Turkey.

It was in Turkey where Paraskevi experienced her first encounter with the law. One day, as she was preaching just beyond present day Istanbul, in the village of Therapia, the soldiers of Emperor Antonius Pius arrested her. The charge against the young missionary was that the blasphemous words which she uttered were the cause of all the ills that had recently befallen the empire.

At her trial, the Emperor, infatuated by her beauty, begged Paraskevi to renounce Christ and worship the idols of Rome. To entice her further, Antonius Pius offered to take her as his wife, and to give her half of his empire. Paraskevi’s reply was quick and resolute: “I have made my choice; no amount of wealth or deprivation can separate me from my love for Christ." Rebuffed and infuriated, Antonius Pius ordered that Paraskevi be imprisoned and beaten mercilessly until she died. The soldiers were astounded to discover that no matter what punishment and torture she received one day, the next morning she would be as refreshed and carefree as if nothing had happened.

Fearing the wrath of the Emperor, the soldiers decided to report this strange phenomenon to him. Castigating the ineptness of his soldiers, Antonius Pius shouted another form of execution. This time he ordered the soldiers to take Paraskevi out to the spot where she was arrested and to prepare a cauldron of boiling water, tar and oil. He further stated that it would be his pleasure to personally supervise the scalding of that "blasphemous Paraskevi".

When Paraskevi was finally thrown into the boiling cauldron, she reacted as if the water were delightfully lukewarm. In utter disbelief, Antonius again began castigating the soldiers. Softly and with a loving smile, Paraskevi reassured the Emperor that his soldiers had executed his command faithfully. She also stated, "My Lord and Master wills that I continue His work". Utterly enraged and oblivious of her words, Antonius yelled, "Sprinkle me with the oil and tar. I don’t believe what I see!" Obligingly, Paraskevi scooped some of the boiling mixture in her hands, and splashed it on the Emperor’s face.

Antonius squealed with pain and began yelling, "I’m blind! I can’t see!" Instinctively, he began imploring the Saint to have mercy and pity on him. "Restore my eyesight, and I shall believe", he begged. "Your God is surely the true God!" Accepting his latter statement as a confession of faith, Paraskevi jumped out of the cauldron; rushed to a spring of water that was nearby, and scooped up fresh cool water onto Antonius’ face, invoked the name of our Lord and Savior Jesus Christ, and sealed his eyes with the sign of the Precious and Life-saving Cross and the Emperor’s eyesight was restored immediately!

The miracle had such a profound effect on Antonius that he not only freed Paraskevi, he ordered that all persecutions against Christians be stopped and he himself was baptized in the name of the Holy Trinity. Thus, Paraskevi resumed her apostolic mission with greater zeal and faith. The calm, however, did not last long. Marcus Aurelius, Antonius’ successor, renewed the persecutions against the Christian Church. Paraskevi was beheaded in Rome on the 26th of July, in the year 180 A.D.