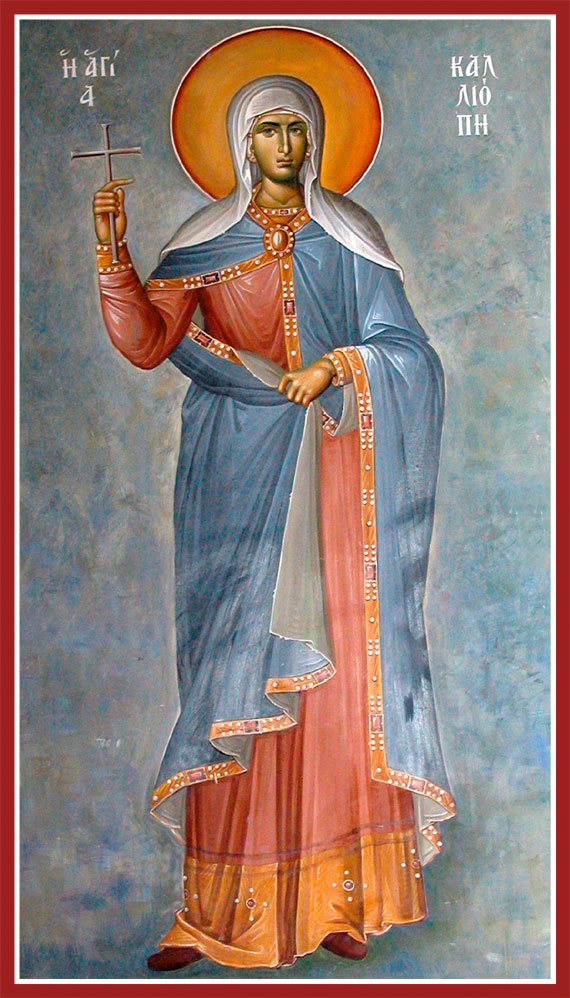 One of the genuine heroines of third century Christianity was a lovely girl with the name of Kalliope who lived during the reign of the vicious Emperor Decius, an extremely calloused and pompous monarch who took delight in barbarous acts, chief among them the persecution of Christians. When Kalliope reached the age of twenty-one she had already passed the age when most women of that day married, but it was not for lack of suitors, which she had in great numbers. Her days were filled with activity, social and religious and twenty-one years had come and gone seemingly unnoticed. When at last she seemed ready for marriage many suitors asked for her hand. One pagan suitor sent word that were she to reject him in favor of another, especially a Christian, he would see to it that the pagan authorities would carry out their form of justice. Kalliope did not hesitate to not only deny this suitor, but made it plain that she would not marry him even if he were a Christian.

The threat to her life was carried out and, through the use of false rumor and accusation, she was brought to trial before the magistrate. She stood accused of a variety of crimes ranging from a mockery of the pagan faith to treason against the state, all of which was attested to by a parade of well-paid witnesses. The rejected suitor stepped forth to offer a withdrawal of the charges against her if she would disavow Christ and become his pagan bride. The alternative was torture, and if that didn’t bend her will, then it was death.

If Kalliope had any fear she did not show it but instead she declared that the only mockery in this affair was the trial itself. Furthermore, she asserted her faith in Jesus Christ and gave no indication that she would recant. That was enough to seal her fate and she was led off to prison. Kalliope was put to the cruelest of tortures. Taken to the public square, she was bound to the post and mercilessly flogged until her clothing and flesh were in tatters. Her beautiful face was scarred with branding irons and salt was poured into her open wounds, and while the breath of life was still within her she was told to disavow Christ. When this gallant girl refused she was put to death. The feast day of Saint Kalliope is celebrated on June 8.