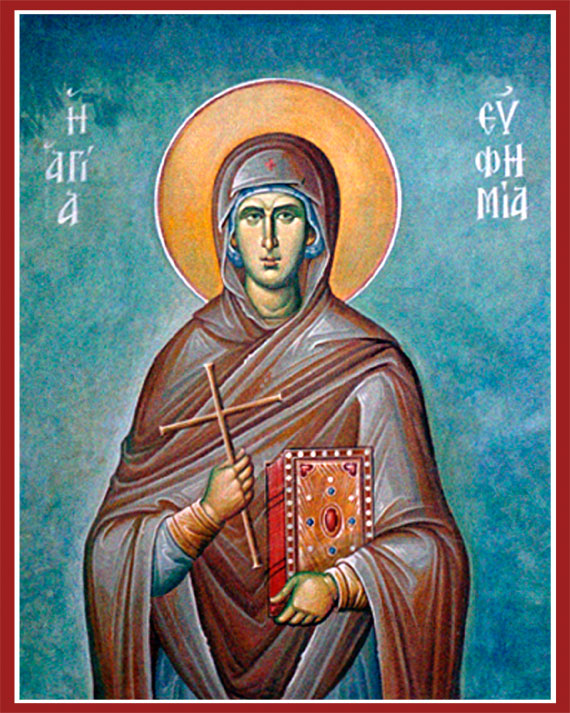 Euphemia lived at Chalcedon in the reign of Diocletian (284-305). Her parents were rich and devout and brought her up in the love of Christ. At that time, Priscus became Proconsul of Asia. He was an enthusiastic devotee of Mars, and ordered all the inhabitants of the Province to come to Chalcedon to celebrate the feast of his god, under pain of death. As a result, Christians fled in small groups to isolated houses or to the deserts in order to escape the tyrant and safeguard their faith. Saint Euphemia was among those who went into hiding.

They were soon discovered and brought before the Proconsul, who tried to persuade them to sacrifice by flattering their youth and good sense. “Do not waste your time and your words on us,” the Saint answered him. “We are people endowed with reason, for whom it would be the greatest disgrace to abandon the one true God, the Maker of heaven and earth, in order to worship dumb, senseless idols. We are not afraid of torments you threaten us with. They will be easy for us to bear and will show the power of our God.”

These words enraged the Proconsul, and he had Euphemia and her companions tortured continuously for twenty days. Finding their faith completely unshaken, and seeing that Euphemia was the leading spirit of the group, he ordered her limbs to be crushed by iron wheels. But the Martyr called upon the help of God and was discovered to be completely unscathed. Then she was cast into a furnace with flames forty feet high, but God came to Euphemia’s aid there also, and sent an angel who drew the flames away from her. Seeing this miracle, the executioners Victor and Sosthenes turned to Christ, and died as Martyrs some days later. The Saint had many more torments to endure, from which God each time delivered her, showing how much stronger Grace is than any torture devised by man. In the end, she was thrown to the beasts, and gave up her soul to God through the mere bite of a bear.

When the persecution of Diocletian ended, the Christians laid Saint Euphemia’s relics in a golden sarcophagus, placed within a church that was dedicated to her. Her relics attracted crowds of pilgrims for centuries. They were moved to Constantinople in 616 at the time of the Persian invasions, and remain intact to this day in the church of the Patriarchate at the Phanar. The feast day of Saint Euphemia is celebrated on September 16.