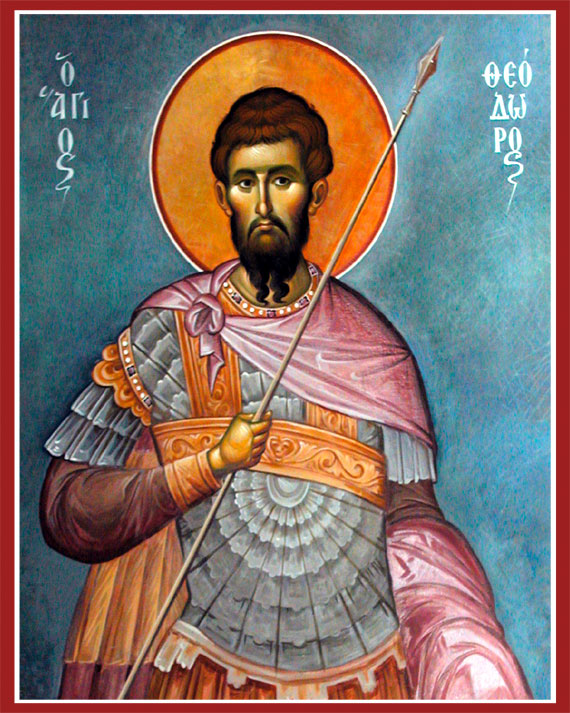 This holy, glorious Martyr of Christ came from Amasia in Pontus and was a Roman legionary at the time of Maximian’s great persecution (c. 303). He had been a Christian since childhood but kept his faith secret, not out of cowardice but because he had not yet received a sign from God to present himself for martyrdom. While his cohort was stationed near the town of Euchaita (Helenopontus), he learned that the people of the district went in terror of a dreadful dragon, which lurked in the surrounding forest. He realized that here was the quest in which God would show him whether the time had come to offer himself for martyrdom. Going deep into the wood, he came upon an abandoned village whose only remaining occupant, a Christian princess named Eusebia, told him where the monster had its lair. He set off to find it, arming himself with the sign of the Cross, and when he confronted the roaring, fire-spitting beast, he thrust his spear through its head and killed it.

Convinced that now, by God’s Grace, he would be able to vanquish the spiritual dragon, the Devil, just as he had felled the visible fiend, Saint Theodore returned to the camp, ready to confess his faith. When the commander of his cohort ordered a sacrifice to the gods of the Empire, Theodore remained in his tent. ‘I am a Christian,’ he told the squad who came to look for him. ‘I adore only Christ. He is the King whom I serve, and to Him only am I willing to offer sacrifice!’ After plying him with crafty questions, they left him in order to interrogate other Christian soldiers. Inflamed with divine zeal, Theodore encouraged his fellow Christians to show themselves worthy of Christ, who had chosen them to be soldiers in His army on high. That night he went to the pagan temple and reduced the altar of Rhea, the mother of the gods, to ashes. He was caught in the act by a verger, and brought unresisting to the governor Publius. There was uproar in Euchaita when the deed was known; but Theodore replied calmly to the governor’s questions, showing the absurdity of regarding as a deity a lifeless piece of wood which had been reduced to ashes in a few moments. Threatened with dire torments, the Saint responded; ‘Your threats don’t frighten me because, amid torments, the power of Christ will be joy and gladness to me.’ Grinding his teeth in rage, the governor had him thrown into a gloomy dungeon. That night, Christ appeared to His valiant servant and promised that His grace would be at once his food and drink, his joy and shield. Thus comforted, Theodore spent his time chanting hymns with the Angels, so that even though his cell was bolted and barred, his captures thought that other Christians must have joined him there.

When offered bread and water, Theodore refused it, saying that Christ had promised him food from heaven. On coming before Publius for the second time, he was offered the post of high priest of the idols, at which he laughed, and assured the governor that he was ready to be cut in pieces for love of Christ. He was then hung by his heels while his body was lacerated with iron claws. But faced with the Saint’s indomitable resolution, the tormentors labored in vain, and the governor, fearing lest his example encourage other Christians, decided to be done with him; and he condemned him to be burnt to death. When they reached the stake, the Martyr took off his clothing and sent up a fervent prayer that God would strengthen the other confessors. He walked freely into the flames, which surrounded him but left him untouched as though wanting to do him obeisance. In the midst of this triumphal circlet, Saint Theodore gave back his soul to God with thanksgiving. The pious Eusebia ransomed his body, which she took to Euchaita. A church was built there in honor of the Martyr, who obtained healing of soul and body for many pilgrims who came to seek his intercession.

In 361, Julian the Apostate was doing his utmost to restore pagan customs. Knowing that the Christians were accustomed to sanctify the first week of Lent by fasting and prayer, the wily tyrant told the Prefect of Constantinople to have all the foodstuffs set out for sale in the markets sprinkled with blood of animals sacrificed to the gods, so that no one in the City would escape the contagion of idolatry. However, the Lord did not abandon His chosen people, but sent his servant Theodore to outwit the tyrant. Appearing in a vision to Patriarch Eudoxius (360-4), the holy Martyr informed him of what was afoot and told him to instruct the Christians not to buy food from the markets but instead to eat kolyva made from grains of boiled wheat. Thus, thanks to the intervention of the holy Martyr Theodore, the Christian people were preserved from the stain of idolatry. The Church has commemorated this miracle ever since on the first Saturday of Great Lent, in order to remind the faithful that fasting and temperance have the power to cleanse all the stains of sin.

Saint Theodore Tyron wrought many other miracles for those who had recourse to him with faith, and who persevered in prayer in his church. One day, shining in glory on his white horse, he appeared to a poor widow and restored her only son who had been captured by Saracens. He often brought the tempest-tossed to safety, thieves to light and runaways back to their masters. In all his miracles, this Roman legionary showed that he had become the heavenly protector of the Christian people.